I obsess about subways. I think they are one of the most important things we build as a species. Unsurprisingly to those who know me, i have developed an entire rating system, which balances scope of service, hours of operation and ticket price. This system posits that Moscow has the top rated underground transport.

On this trip, I have been staying in Berkeley and often visit San Francisco – which means I travel on BART. The Bay Area Rapid Transit and I have been friends since I graduated. But in the time I have been gone, she has finally matured. The difference since I lived in the Bay Area back in the ’80s is two-fold: scope and schedule.

BART now goes out to San Francisco International Airport (SFO). For it to be a world class system the light rail must connect the CBD with the airport. And it was politics, not planning that kept this logical transit hub off the original route for the system. Similarly the fine folks from Marin did not wish for the great unwashed to be zipping in by inexpensive and convenient light rail, so they remain less accessible. And the system is expanding; I imagine in a decade it will connect seamlessly with San Jose. 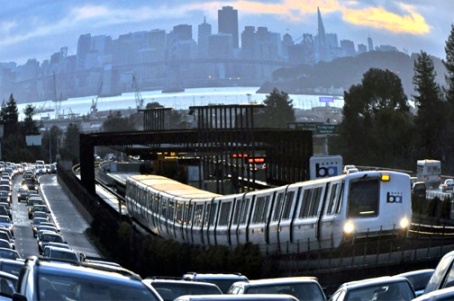 But for me it is the more elegant touches that promote BART to the rank of the finest systems – that is timed transfers. When you pull into MacArthur or 19th street in Oakland, the train you are transferring to is on the opposite side of the platform having just arrived. You walk across the platform, sit down and the train goes. [Of course the Dutch figured this out decades ago, but the yanks do it almost nowhere.]

5 responses to “Scope and Schedule”