Reactor projects are like zombies, hard to kill and even when you think they are dead they keep coming back.  The Belene nuclear power plant in Bulgaria is certainly such a project.  In order to kill it in 1992, Bulgarian activists had to actually overthrow the government.  But like a zombie, this multiply canceled project just kept coming back.

This week, after years of hard work, some dear friends finally killed this beast.  This time i looks like for sure.  I know some of these people and a bit about this place and want to tell my version of it’s story.

Bulgaria is what i call “tough turf” for international political organizing .  I was the international coordinator for Ecotopia 1992 in Bulgaria and i had heard all the horror stories about organizing there.  “Neme Problema” literally means “No problem” in Bulgarian, but what it really means is there may well be a problem and i am not telling you about it.  I thought myself clever and was determined to organize around this cultural divide.

When we arrived at camp and there were no programs to be found, i was told they would have printed them, but there was no paper available in their town.  The camp was a big success, the Bulgarians were lovely,colorful, resourceful, generous, friendly people.  The logistics were a bit of a disaster.

Ecotopia generally had a cross European bike tour to it

Jan Haverkamp and i first worked together at Ecotopia 1990 in Hungary.  He dressed up in a suit and pretended to be the Head of PR for Westinghouse Europe talking about how wonderful nuclear power was going to be for eastern Europe.  His presentation was crazy making for the activists around him who knew nuclear was the wrong answer, but we stymied to counter his clever arguments.  Jan’s demonstrated how deep in you need to get to win these arguments against these highly trained nuclear apologists.

Later he would be the real father of my legal daughter Barborka.  My first wife Adela had her now multilingual daughter not long after we were married.  Czech law says that the husband is automatically the father.  You probably know a fair few people who have a daughter and an ex-wife, but i am likely the only one you know who has a wife and an ex-daughter.

Barborka and her real dad JanH

Jan headed up the international effort to effort to stop Belene the second time around, working mostly through Greenpeace and sometimes through WISE (the World Information Service on Energy).  As is true for many anti-nuclear campaigns, there were a myriad of different angles used.  They successfully got the 13 west European commercial banks to withdraw from the project (a critical step in its demise).  They organized local, national and international protests.  They lobbied in the capital Sofia.  They proposed alternative energy scenarios and employed expert studies showing the reactors were on earthquake faults and would never be completed on budget. [A quake less than 10 miles from the proposed reactor killed 120 people in 1977]  And most importantly with these types of campaigns, Jan helped bring in lots of different types of allies to the cause.  There were high profile/visually dramatic actions. 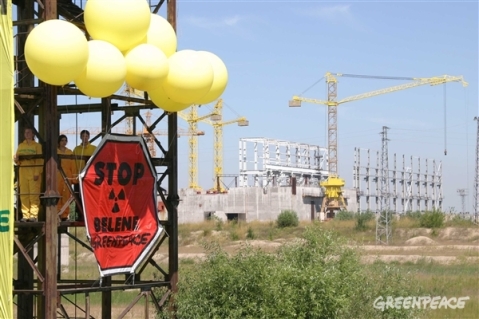 Law suits were filed.  The Environmental Impact Assessment was challenged.  The project dragged for years in the courts.  Bulgaria is the wild-wild west part of eastern Europe.  Local activists that Jan worked with got death threats, their credit blocked, their land seized and suffered near constant harassment.  Two attempts were made to kill Albena Simeonova, the lead local activist who worked with Jan, by a Bulgarian organized crime syndicate.  Too much was at stake for the proponents of this plant to permit let the opposition go unchallenged.  Body guards were brought in to protect the locals.   After the assassination threats and the international outcry, the national head of the police would step up security for these local activists.  Ultimately, this same head of police would become prime minister in2009 and armed with damning financial reviews he would this week take the daring step away from the Belene nuclear plant.

Jan is quick to credit the tremendous number of people who were important in this fight.  But i know this, were it not for the efforts of my outlaw co-dad, we would likely still be fighting this beast today instead of celebrating its demise.

Jan’s has written a more complete history of the fight against this reactor.

There is so much good nuclear news thsis week i must tack on to this article:

1) German nuclear utilities E.On and RWE have bailed on building two reactors in the UK and will build gas plants and real renewables instead.

2) The NRC is slowing the approval process for proposed two new Sumner reactors in Florida.

3) Review for new reactors in the US will likely be extended because we have not yet integrated in the “Lessons learned” from Fukushima.