The best job i ever had was teaching the revolution class at LEC.

And over the dozens of kids i worked with over 5 years, the one i was most worried about was Ian.  Ian was an angry punk who ran afoul of the law several times before he was 18.  Stupid shit, spray painting a car, riding his bike on the roof of buildings.  I appreciated his spirit and doubted his tactics.  I knew i was going to lose some students to rougher futures and possibly short ones – Ian seemed destine for a rough road.  Not long after he graduated he moved away and we drifted out of touch.

I ran into Ian in a converted garage bar in Cville, when i went out with fellow LEC grads Hayden (Corb’s son) and Ruth (former student and LEC teacher).  Ian was studying fine arts by day and working as a bartender at night at a vaguely interesting sounding place in Philly.  He was studying older painting techniques, some of which he had employed on making a sign for the bar we met in.  He was also working with Occupy Philly.

He talked about is organizing there.  About working at first with principally white privileged activists who had never been arrested before and thought the police were their friends.  He worked to bring in the new black panther party and folks from MOVE (which was famously bombed by the Philly police).  I asked if the black panthers were open to a mufti-cultural movement (since my last two experiences with them at large protests were of them being homophobic and racist).  Ian told me black panther and Philly political death row prisoner Mumia Abu Jamal had encouraged these groups to work with occupy.

He spoke of 40% of Philly being abandoned and Occupy helping evicted folks return to their homes. He spoke about protestors arresting police and leaving them handcuffed.

I told Ian that Sara and other Cville Occupy kids has been impressed with and inspired by the Philly Action Team that came down and trained last October.  Ian told me he was part of that team

And then he want on a little rant about how the LEC revolution class had changed his life by giving him the radical self reliance orientation and critical of the system thinking.  He spoke as a quirky, confident organizer. 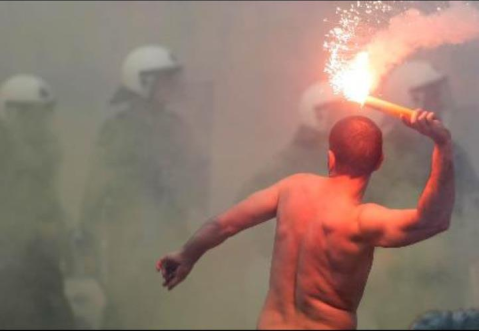 And he very much remains an angry punk running afoul of the law. And is my hero for it.