Just as the restarted Oi 3 reactor was signaling the end of Japan’s brief respite from nuclear power, the special independent commission of the Japanese parliament was releasing its findings on the Fukushima meltdowns.

i have read and been affected by many governmentally/bank appointed “independent” commissions findings on nuclear power.  The number which were honest or independent or anything other than a whitewash endorsement for reactors i can count on one hand.    So i was quite surprised when i read the conclusion, that the Fukushima meltdown was a preventable, man-made disaster stemming from the worst conformist tendencies of Japanese culture.

The report clearly blamed both TEPCO and the government for mismanaging the disaster, but especially TEPCO for not building a real nuclear safety culture and capturing the regulator.    Three previous reports let the utility off easy blamed mother nature saying such a size tsunami could not be predicted.   Where the utility and former prime minister sharply disagreed, the commission tended to believe the now anti-nuclear former PM Kan.

“What must be admitted, very painfully, is that this was a disaster ’Made in Japan,”’ Kurokawa who chaired the commission wrote. “Its fundamental causes are to be found in the ingrained conventions of Japanese culture: our reflexive obedience; our reluctance to question authority; our devotion to sticking with the program; our groupism; and our insularity.”

It also recommended a dramatic disconnection of the regulator from the nuclear utility – something which there are few good models of world wide (the nuclear lobby owns the NRC).

As has been discussed in this blog, it is unlikely that Japan will be able to quickly restart any reactors after the pair at Oi.  This creates a tremendous problem for the nuclear utilities which are looking at roughly a trillion dollar loss if these reactors are not restarted.  This is a nearly unimaginable amount of money (about the equivalent of the entire GPD of Mexico or S. Korea).

So the way that you prove nuclear power is needed is you stage blackouts, you might have to kill some folks in the summer heat wave to win enough sympathy to restart more reactors.  There are leaked industry documents demonstrating that there is no need for blackouts.  But i would not be surprised if we got them anyway. 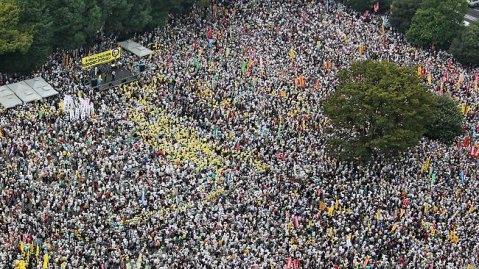 Voice of America points out that these are the largest demonstration Japan has seen in decades.  And goes on to observe that the largely state run television news service had only 20 seconds on these huge actions.  Recent polls show 71% of Japanese oppose these restarts.

But there is tremendous upheaval in Japan now and the longer renewables ramp up (over 2 reactors worth of solar by end 2012) and fossils fill the gap, the more clear it will be that nuclear is not needed.