i am moving.  Only to another room in the rambling well designed building i live in, which is called Tupelo.  The reason i am moving is a couple who are approved for a pregnancy want to move into the wing i live in, and i am one of the people who is most willing to be relocated.  The reason that i am moving into the room i am going into is another couple is moving to place their rooms next to each other so they can better control the living situation for their prospective family as well.  This second couple has also been approved for a pregnancy.  [Minus one point for you if you assumed both couples were heterosexual male and female pairs, they are not.] 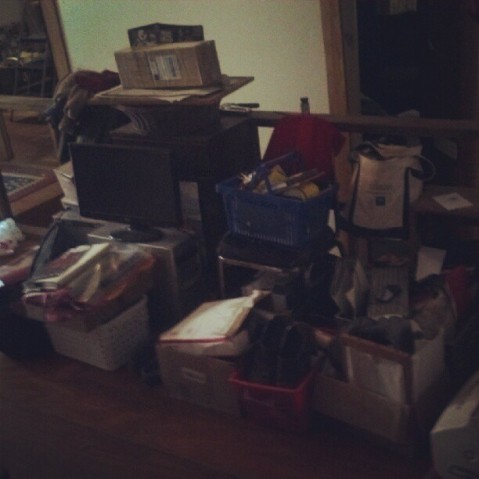 it took 40 minutes to move everything i own

So i moved today because i am going away for a week and i dont want to hold up everyone else’s move while i am gone.  Unsurprisingly, there was someone in my room guesting.  The lovely and talented Angie, who is much to my glee, relocating to Cville.  Angie helped move a bit of my stuff, but mostly she moved her stuff that was in my room out of my way.

I cant put my stuff in my new room (which is actually one of my first rooms in Tupelo which is a two level loft room and i really like) because Rosie is not currently ready to move out.  This is not a problem, because i can (with the residences approval) dump all my belongings in the North Wing downstairs living room.  Thus the picture above.

After i moved the stuff into the living room, i thought about what it represented.  At this point the vast majority of my material accumulations after 55 years could fit in a 3′ by 6′ space.  I was pretty happy about this (especially since most of the furniture in this picture is not really mine).

i have always identified as an anti-materialist.  And Twin Oaks is one of the most comfortable places to have this life style choice in that there are all high functioning clothes, bikes, cars and other libraries. 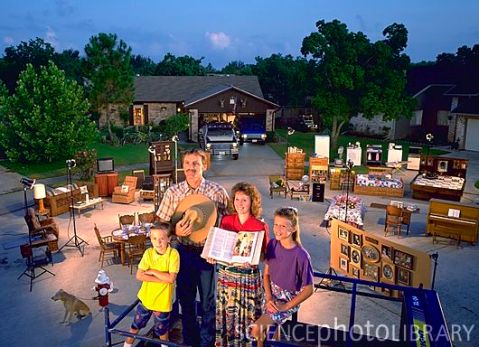 My upbringing was not so minimalist.  I was supposed to outperform the “average American family” depicted about with their stuff.  And as happy as they look, i am not interested in changing places.

3 responses to “Everything i have”