Another two bite the dust

Duke energy has announced that it will not be building two new reactors at the Shearon Harris site in North Carolina after wasting $70 million on the ill conceived pipe dream, which it wants the rate payers to reimburse.  Duke, which is the largest utility in the US, decided in February to shutter it’s idled Crystal River reactor both because it had one of the most expensive malfunctions in US history and because the utility was able to bilk rate payers for $1.6 billion for closing the plant. 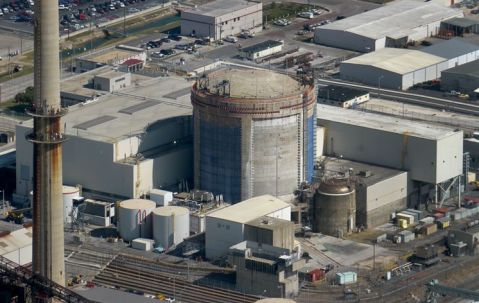 Crystal River reactor – we make mistakes, you pay for them.

And while both of these announcements are good news, Duke is hardly retiring from it’s plans to build reactors, because it has been so profitable to plan them even when they are not going to build them.  The case in point is the two Levy reactors Duke “plans” to build in Florida, the most expensive reactors in US history at $24.7 billion.  [Remember that this is the proposed cost going into the project.  Typical reactors in the US are well over 200% overbudget, meaning the actual cost of this project might well be over $75 billion].  Despite there not being a single brick laid at the Levy plant, Duke has already gotten $1.5 billion from Florida rate payers for the proposed project, which means it can simply pocket $150 million in profits – even if it never decides to build the reactor.

This nuclear cost crime is so unpopular in the state that the unusually pro-nuclear Florida legislature just tightened cost recovery requirements to include that the Public Utilities Commission needs to determine that the project is not just feasible but “reasonable“.  This will make it slightly harder for corporate criminals like Duke to get away with these tricks, but sadly only slightly.

5 responses to “Another two bite the dust”