Early on in the chilling and powerful Costa-Gavras film Z about the Greek military coup in 1963, there is a telling scene.  A political organizer has just given a rousing speech to a collection of Greek radicals.  His aid challenges him about what he has said; “You blamed the Americans for this problem, but the Americans had nothing to do with it.”  To which the organizer responds;  “Always blame the Americans, even when you’re wrong, you’re right.”

i felt a bit like the confused aid this morning while chatting with Gihan from Cairo when she told me that Obama was responsible for the violence happening in Egypt right now.  But knowing her as i do, i knew that this was not an effort to deflect national responsibility for her country’s problems.  She is a deeply fair and thoughtful person.  So i started digging.
What i knew already was that the Obama administration was in the middle of negotiations between the Muslim Brotherhood (MB) and the Egyptian military when the election of president Morsi took place 2 years ago.  The extremely powerful and corrupt Egyptian military was afraid of losing power to the also corrupt, newly elected MB government.  US aid and recognition were critical factors in brokering this transition.  [Egypt is on of the largest recipient of US aid in the world]  But after a brief honeymoon of international praise for his having brokered a settlement in Gaza, Morsi’s stock both domestically and internationally started to tumble.  Morsi’s attempted power grab and failure to negotiate with any of the country’s opposition groups began his slide towards last weeks well-supported (by Egyptians) military coup.  It is rare that there is such wide-spread public support for a military coup.
The problem struck when the protesters were again returning to Tahrir Square in huge numbers and Obama said that Morsi was the elected leader of Egypt.  While this is true on it’s face, it gave the MB the false impression that the US would back them as they pushed back against the protests.  A push-back which included killing some of the non-violent protesters.  This type of response to civil unrest was central to unseating Mubarak almost 3 years ago now. 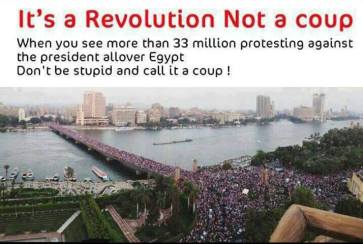 This situation is unusually murky.  Is it a military coup, or a revolution?  While they say they are inspired by the huge protests, the military is clearly being opportunistic.  Will there be elections new in Egypt? It seems almost certain that there will.  But the arrival of multiparty elections in Egypt was a political gain from the revolution which overthrew Mubarak, not these recent giant street protests.  One of the things which came to light after the 2011 revolution was just how powerful the military was, with tremendous land holds and control of the government infrastructure.
Egypt is likely on the road to a more pluralistic and democratic government, my hope is the US does not continue to be a pothole in this road.

One response to “Blame America”