“You should definitely do it. It will never work.”

We are returning for another Point A trip to NYC.  We in this case is Belladonna Took, Aster, Gpaul, Angelica and myself, all from Acorn or Twin Oaks.  On the way up i am reminded of our recent trip and the tales tangled with it.

One of my favorite stories is the Phantom Tollbooth by Norton Juster.  It has a contemporary Alice through the Looking Glass feel to it where figures of speech become characters in the story and a fair morality is woven among amusing chapter long vignettes.  If you have a kid you read to and you have not read this story to them, you should share this together. Central to the story is the idea that main characters have a secret which they are not telling Milo, the hero of the story, and they will only tell him when he returns from his quest.

When Milo returns from his harrowing quest they reveal the secret about his mission which is “It was impossible”. But he could not be told this at the beginning of his quest for it would discourage him.  Our experience of NYC is sort of the other way around.  When we explain the Point A project to people some excitedly tell us “That is fantastic, you really should do it.  And it is completely impossible.”

Consulting with Rhyme and Reason

i am only beginning to understand this mentality.  It comes in part from long term urban activists seeing all the wonderful institutions they love vanish with time.   At the front line of chronicling the demise of the city is Jeremiah’s Vanishing New York.  This blog‘s subtitle is  The book of Lamentations: A bitterly nostalgic look at a city in the process of going extinct. This blog is also one of the best sites i have found describing gentrification (which is actually dead) and hyper-gentrification (which is the current genetically modified version of the problem).

When i asked one of our NYC allies what this meant, they briskly proposed this translation.  “It means they are not going to help you.”  Further elaborating they said “They don’t want to be discouraging you, but they are presumably busy with ideas which might work, so they won’t be wasting time on your plan, which won’t.” 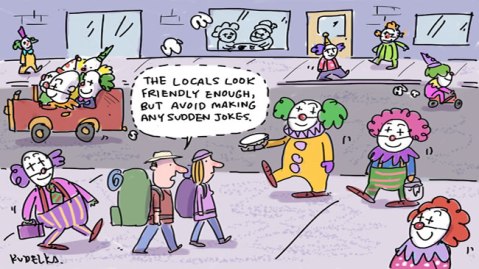 We are definitely outside agitators.  i find myself taking a crash course in New Yorkers.  They often show up late, they have crazy busy lives (i have heard people – including myself – saying they were “double booked”, it was not til i spent time in NYC that i heard someone say they were quadruple booked), they have complicated housing situations.  Many identify as artists and a surprising number express interest in having more community in their life.

Any insights into this crash course in urban culture i find myself now taking are appreciated.  The best place to talk about them is this excitingly unfolding Community Matchmaker event in Brooklyn on Oct 18th.

7 responses to ““You should definitely do it. It will never work.””