When they tell you “Renewables aren’t ready”

i barely follow the renewable energy scene.  People often send me news articles they think are interesting.  i feel like this part of the revolution is actually progressing quite well, so it needs less of my attention.  Something which did catch my eye was a recent EcoWatch story called: 25 Top Companies Investing in Solar  This quote caught my eye:

Combined, these blue chip companies have deployed 569 MW of solar capacity at 1,100 locations—a 28 percent increase over a year ago and a 103 percent increase since 2012, when the first report was released.

569 MW installed capacity is less than 1/6 of a reactor (with 35% capacity factor for the PV).  But what is important here is that these are non-utility players and that the amount doubled in two years.  That would be 5 reactors worth in the next 10 years (the same as the current expected amount of nuclear power that will come on line in the US is all the utility based reactors under construction are completed on time – which is quite unlikely). 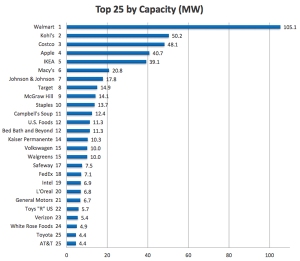 But doubling is crazy fast.  At this rate by 2025 we will have replaced all the reactors currently running in the US with non-utility renewables power.  And by 2030 (in this very unlikely scenario) we will have a fully renewable grid nation wide.  Even if the nuclear industries most ambitious plans are realized, we will only have a twenty new reactors in this period, failing to keep up with the retirement of aging ones in the US fleet.

So the next time someone tells you that renewables can’t ramp up fast enough, you should observe nuclear power cant even replace it’s dead.