The Other Way to Play

The game of Dominion is fairly popular at the commune.  It is a dynamic card game, and a sister of Magic in that you build decks and the rules are changing all the time.  These kinds of game are pretty complex and they are part of our informal home schooling curriculum.  The fact that our kids want to play, because our adults are playing and because if they play well they can be peers to the adults, are big pluses.

Don’t worry if you can’t understand it.

When i first started playing Dominion with Sami he was not yet 5.  Despite being involved in his home school efforts, i dont keep track of where kids are in the educational process by what age they are at.  It is just not something i think about.

One evening Sami and some older kids wanted to play Dominion.  We each choose some of the perhaps 200 different card types we have in the various expansions so we could create a game.  Sami choose a couple of card types he liked as did everyone else.  There was a bit of negotiating to get some better game dynamics on the board.  All friendly negotiations. 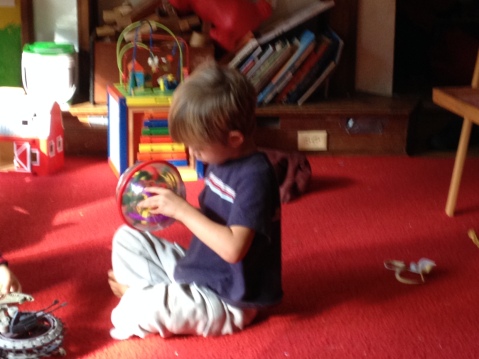 Sami played well, i barely beat him and i was the overall winner.  He got more points than several other kids and adults.

I was talking with Ezra, Sami’s dad, the following day (who Sami had recently beaten) and complimenting his clever kid.  “Yeah, it is pretty impressive.” Confessed Ez.  “Given that he can’t read the cards.”

“He can’t read yet.  But he really wanted to play.  So he memorized all the cards so he could play.”  Ez explained.

“But there are like 200 different cards, and some are crazy complicated.” i was amazed.

2 responses to “The Other Way to Play”