Compersia lands on the Atlantic

A collection of intrepid adventurers have launched the newest income sharing commune in Washington DC and it is called Compersia. After failing twice to name this new community using naming parties, they discovered that one of the limitations of naming parties is that they are good at coming up with funny or lighthearted names. But when you are naming your home you might want something a bit more serious.

The name is barely a month old and the major liberal magazine, the Atlantic, has completed a 6 minute video on them.  Here is the link to the Compersians discussing their community.  The reportage is all in the words of the members and thus it is a pretty upbeat piece of coverage.  Compersia is looking for new members and this might well help.

Curiously, just the day before the Atlantic posting, Realtor.com ran an article called “With Housing Costs Sky-High, the Commune Makes a Comeback” Which quotes a number of our friends at Ganas and Twin Oaks. 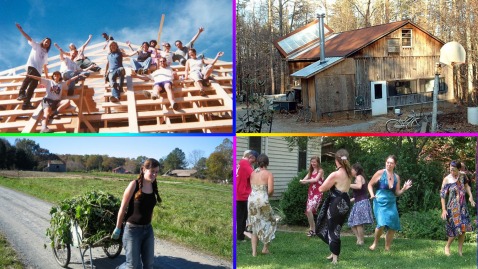 A collection of Old Twin Oaks photos use by Realtor.com

Nice to be seen a bit by the more mainstream press.

6 responses to “Compersia lands on the Atlantic”