We had an amazing QuinkFair event, really beyond what most of the disorganizers had dreamed would be possible.  On a conventional funological scale it was an A+ event for me, it changed my life in positive and likely lasting ways.  The emboldened friendships with Jason Taylor and Rick Haley have already changed what i thought i was doing.  I got quinked hard this year, it was not always comfy, but it’s a better path.

From a more mundane perspective, we succeeded in avoiding common festival problems: no one got hurt (beyond a nick with a kitchen knife or a bruised knee), nothing got broken, no one freaked out, no one had to be asked to leave the event.  We did not do serious damage to the property.  After hanging dangerously below the 100 ticket “break even” point until the day before ticket sales closed, on the last day we sold 50 tickets, putting us comfortably into the black.  (The disorganizers don’t make money from QuinkFair, but could lose money if we sell too few tickets to meet the cost of necessary supplies, which would likely have prevented any future attempt.)  The weather was almost perfect, with warm days and cool dry nights, few bugs and a light breeze.  Cold for swimming, but a lovely lazy river to watch and spark a new friendship.

But these measures can’t begin to capture the magic of the event which we created.  Participants fell in love, got bounced out of funks, discovered new communities which they are now thinking of relocating to, and there were all manner of quinks.  Many people announced they wanted to help more with the next event.  Our Happy Hills hosts were sufficiently excited that they started talking about how we can build the site and what infrastructure will be completed by QuinkFair 2022 that will make things much easier (for example Happy Hills is digging a well, making our water transport issues dramatically smaller).

We gave responsibility to a number of people who had not done the particular thing we were asking them to do ever before.  Jade stepped firmly into her stage presence power as the lead act and MC for the Friday night talent show.  I have to confess I always worry when she does stand up, because for it to work everything has to go right – the jokes have to land, the audience has to be open, the comedian needs to deliver well and at best it is a hard act to pull off.  Jade put it out of the park, the audience cheered her which set the tone for each following performer. Storytellers, accordion players, sexy dancers, musical numbers and tiny fireworks followed in a surprisingly professional show for being pulled together at the last minute.

Duncan volunteered to host the Saturday night effigy burn and coordinate the team of folks crafting it.  Wolf organized an impressive fire conclave.   Jason Taylor (who won the QuinkFair most valuable disorganizer award) repositioned light and sound systems at the last minute with grace.   Macaco inspired a collection of drummers and percussion musicians.  Carmen (aka “Beast”) drove the drum rhythms longer and harder and faster than most of us thought a human body could go.  Several participants said they felt like Duncan successfully channeled Jim Morrison to the event, my personal feeling is this is a polite way of complimenting something that was a tad more dangerous and landed us in exactly the right mindset to burn the effigy monster which had been under construction for some weeks, but took its final form just hours before the burn.  Duncan had us up dancing, screaming, chanting and crying.  It was electric.  For the burners in the crowd, this felt like home.

Wolf organized the fire spinners for a pre-effigy burn which was pretty impressive given the relatively small size of the event. This fire conclave had never performed before, but you could not tell that from the show they put on.   Darrell brought in some ringers for the night which really added to the show.

Running an Aphrodite’s Temple at a small festival with a diverse group of participants is tricky work in the best of circumstances.  Sage and Duncan pulled off consent workshops, play parties and more in the newly named New Amsterdome, at the far edge of the property.  They took a basically empty 30 foot dome and converted it into a comfortable and beautiful, if slightly sparse, space.   Altars from several cultures, low power lights, and impressive crystals drawn from the back of a jammed Subaru made this temple a space to be both respected and celebrated.

An earlier blog post spotlighted Serenity Communities involvement in the scholarship ticket program.  In the end, over 20 scholarship tickets were offered and the participants were significantly more diverse than most gatherings in the region.  Still more to do, but it is a strong start.

We were graced with amazing musicians of all ages and talents who collaborated in various fashions. Macaco was able to pull together the drummers and singers to help shape the group ceremony soundscape, so that everyone could feel included. Ambient sounds as well as vocalizations, drums, strings, as well as pre-recorded tracks were used to help pull our energies together and raise and heal our spirits. Several traditions including samba and capoeira were also introduced and enjoyed. Truly, our energy soundscapes were orchestrated well.

In our search for quinks, one of the things which came up was taking on a new name, which is a way to communicate that you are doing something which is truer to yourself than what you were doing before.  You are moving towards being more the you of who you want and less how other people want to identify you.  We had a naming party, in an express, but effective version of that commune-inspired activity and a Gibson became Meadow. A last minute choice to put themselves forward as the target of the workshops naming party, which she is still happy about.

And at this same workshop Ericka became Tangle.  She had been looking for a community name for a while so she came to the naming workshop. The name “Twist” was suggested because of her organizing style of bringing diverse players together to manifest her projects (like the Carbon County Catholic Worker giant beautiful building or forming Serenity Community for Justice and Peace.  But when someone suggested “Tangle” she jumped on it, it felt so right.  Because both her dreadlocks were “tangled” as well as her enthusiastic style of organizing.  Drawing from lots of different communities and movements she is able to tangle being a mom with direct activism at Line 3 direct activism at Line 3 , to forming a new community while handing off another one.  Some newly taken names are hard for me to remember.  Tangle will not be one of them.  I often rename months for new babies or new beginnings.  October this year is called Tangle.

There was also a Flip 2020/Flip Georgia reunion of sorts.  Spiderman came up from Florida and did a workshop on Metamaterials, Cyprus (formerly Erik from Atlanta) told stories and played other peoples musical instruments. Allison (having just helped boot corrupt politicians out of Bridgeport) and Erik came down in time for the burn and Carlos and Malia did a workshop with many names but encouraged folks to move their activist experience out of their minds and into movement.

There are a couple of QuinkFair participants who i met for the first time and i want to call out because they are doing important work and they are offering to help with future events.  Zoltan hails from nearby Emerson Commons Cohousing and is past president of the on thousand member Cohousing Association of the US. Unlike Meadow and Tangle, Zoltan’s parents chose his impressive name.  And Zoltan surprised  me by exhibiting the behavior that disorganisers cherish. After an engaged goodbye, saying he wished he could stay and help, but he was booked hours away, he came back and blew off his appointment and helped us take down New Amsterdone. Like a fair few participants Zoltan promised to help with future Quink build camps, and i am sure he is good to his word. I asked Zoltan to bring the two most engaging folks from his cohousing association next year and he says he’s bringing more.

Charles Plank is a visionary.  He pioneered coworking which changed the way many workers interact and now he has his eyes set on the broader collection of community movements.  He used QuinkFair as the first few days of the brainstorming retreat for a handful of new colleagues in a new project.  The HomeWorlding project looks to train and strengthen the networking between members and their communities.  Versions of this type of project have been discussed for years. [Aron Heintz, who developed this year’s festival map, coined the term Communiversity – a school designed to teach better shared living skills and how to build cohesion in a group of would-be communitarians and those needing refreshers. ] HomeWorlding has a beautiful host site outside Philly which is close to where i spend time these days at Jetpack. It’s an ambitious and important project and i have already been offering them more advice than they bargained for.

The origin story of the QuinkFair project was a challenge from Spacious (aka Darrell) who came to Cambia and said basically “i have the hardware you need, i have the network of possible participants – if you want to throw a festival i can make most of the logistics happen. “  It was not presented in this direct fashion, but Spacious was clear that if we wanted to try he would be willing to support the project in a significant way.   With this offer comes hundreds of training moments, and in the months leading up to the festival Spacious really lived up to his name and showed occasionally frustrating volunteers how to operate the 10 thousand piece construction set which makes the infrastructure of Camp Contact. 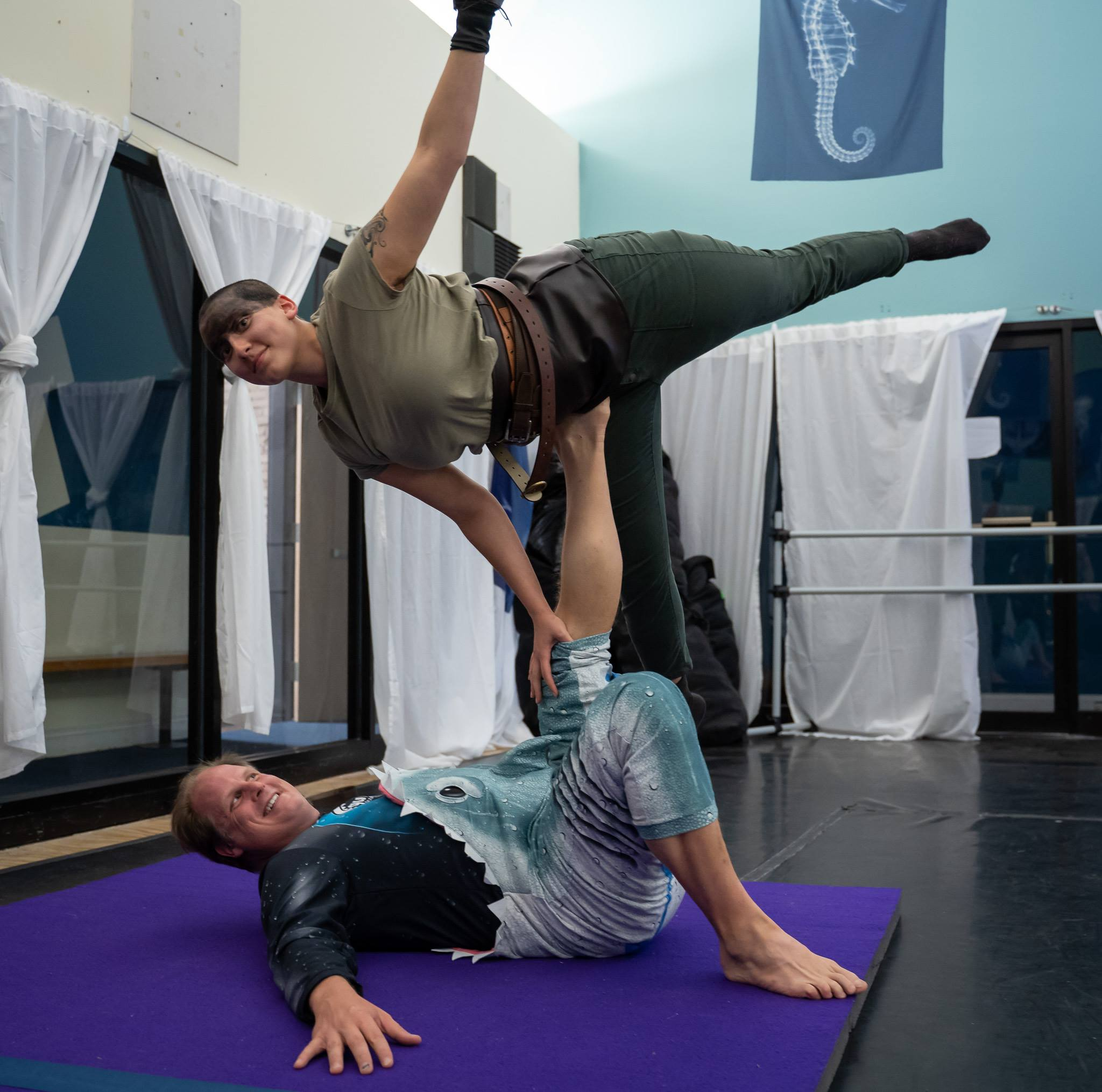 “I come to these events to do contact improv” – Spacious

There were many quinks, especially stemming from the Temple of Oracles.  We had nine different tarot and other oracle card readers.  It was not uncommon for the Temple of Oracles to have three readings being done in parallel.  Some people had intense (and often unexpected) emotional breakthroughs during their readings, including some folks who normally don’t hold the divinatory arts in much esteem.

After listening a bit to Rick, Joy said, “Rick you need to talk with the spirits of the land.”

“But” Rick protested “I talk with the land everyday here”

“You talk with the turtles and the trees, that is not the land” Joy replied.

3 responses to “October is Tangle”