Against all odds, Bernie Sanders still has a chance to become president.  Why do i say “against all odds”?  Well, it starts with the media.

Way back in December, the Sanders staff did an analysis of the mainstream media (MSM) and found that ABC’s World News Tonight had spent 81 minutes on Trump and 20 seconds on Sanders.  Other MSM outlets were similarly uninterested in the popular Jewish socialist running for the country’s top office.  Even the NY Times can’t bring itself to report on this anti-establishment candidate, while it rails endlessly on the establishment ills.

Conventional wisdom would claim that Trump is saying more outrageous and newsworthy things.  I would be hard pressed to disagree on the outrageous part.  But someone advocating for free college tuition and expansion of the ever controversial Obamacare program to cover all US Americans with free health care is saying some pretty newsworthy stuff.  Despite Sanders being remarkable, the MSM is still owned and controlled by a class which finds his radical views unacceptable.

As a political candidate for president in the US you need to have exposure.  What i found canvassing for Sanders in Virginia was lots of people had not heard of him.  So if you can’t get the MSM to cover you, then you need to pay for ads, but these are crazy expensive.  Here is where Sanders is again running against all odds.

Sanders raised $140 million from individual contributions through the end of February.  Clinton raised $160 from people over the same period.  But add to this $60 million in Super PAC money for Clinton and you can see how things are harder for Sanders.

Sanders does not take money from Super PACs. [For a reality check Republicans have raised almost twice as much money as Democrats and over half for the GOP money is from Super PACs, contrasted to 15% for Democrats.]

The thing about long shots is you need to know when to double down and when to walk away.  I don’t generally give money to politicians.  Despite voting, i am still an anarchist and find most of the personality politics repugnant.  I am giving Sanders $27, which is the average amount he has received and feels like a good number to me. 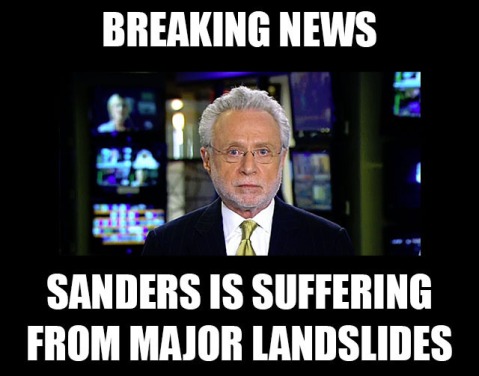 The reason you double down on the right long shot is not because you are going to win, but it is to be part of the springboard of hope.  Sanders has amazing momentum.  Consider helping the campaign in non-monetary ways if you can, especially if you have friends in NY or California.

After the recent set of landslide victories in Washington, Hawaii and Alaska (which were largely ignored by the MSM), it is time to double down.  The odds are still against us, but the odds are always going to be against us.  I am sending my $27. I hope you will too.

Bernie Sanders supporters were understandably happy that their candidate had a crushing electoral victory  over Hillary Clinton.  Sanders won more votes than any other candidate in a presidential primary.  Three times more than Obama in 2008 and 31% more than the previous record holder Republican John McCain back in 2000.

But he did not win the all important Democratic delegate count in the New Hampshire Primary.  This is because the party controls “Superdelegates”, most of whom were pledged even before the first ballot was cast.  Sanders will get at least 13 delegates based on the votes that he got.  But Hillary will get at least 15 based on her votes plus her super delegates.  And in case you have forgotten your high school civics class, votes don’t matter in terms of who gets nominated, delegates do.

It is worth noting (as Nate Silver does in his clever piece on superdelegates) that unlike the delegates, which come from votes in a primary, super delegates can change their minds.  Here is what happened in 2008 when the majority of super delegates were pledged to Clinton and then Obama took off in the primaries.

Super means you can switch

But as Silver points out, this is far less likely to happen with Sanders.

Clinton begins with a far larger superdelegate lead over Sanders than she ever had over Obama. It’s easy to imagine why they might resist switching, furthermore. Unlike Obama, who was perhaps roughly as “electable” as Clinton, Sanders is a 74-year-old self-described socialist. Unlike Obama, who had the chance to become the first black president, Sanders is another old white guy (although he would be the first Jewish president). Sanders wasn’t even officially a Democrat until last year. I’m not saying these are necessarily great arguments, but they’re the sorts of arguments that Clinton-supporting superdelegates will make to themselves and one another, in part because the superdelegate system was created precisely to help nominate candidates considered more electable by party leaders.

The superdelegates system has existed in what is basically its current form since 1984. It was inspired by the desire to keep outsiders (like Trump and Sanders) from securing the parties nomination.  And in this year’s election, this is exactly how it is working.  It may well lead to Trump splitting from the Republican party, which would likely shatter that party’s chances to win the presidency.

This system is in place to make sure the party controls which candidate gets nominated.  Perhaps you think this is unfair.  Welcome to politics in America.

What part of “inevitable” are you not understanding?

I self-identify as an anarchist. Normally, I don’t give money to politicians, though I have been known to make phone calls for candidates. Until today, I have only broken this guideline once, for Ron Dellums.

the most dangerous person ever on the verge of becoming a member of the U.S. Congress

I knew I had to contribute (though this was well before my radicalization.)

I have lots of lovely passionate friends who are big Bernie supporters. He is the only presidential candidate in my lifetime who has proposed a principally positive role for government and has some possibility of not being bought out upon being elected, as Obama was.

I have talked to a number of friends who do not normally give to political campaigns who have given to Bernie, which is why he is breaking fundraising records. And I have sort of been waiting for my moment to cave in and pitch in some cash. That moment is today.

I just read this clever analysis of what Sanders wants to do with ISIL. He needs to sound presidential, so he is not recommending the US sit this one out. But he is suggesting requiring the powers in the region to lead the effort; the US cannot be leading taking on a Muslin extremist threat, that should be done by more moderate Muslims from the region.

What is especially important from an anarchist perspective is the notion that Sanders ‘gets it’ with respect to neocolonialism and is calling out the failed US-sponsored coup-d’etats in Iran in 1953 and Chile in 1973. This is Zinn history, which does not make it often to the classroom, much less mainstream political debates.

And if I am honest about the US needing to understand how it creates the amplifying cycle of the war on terror, then I need to support the guy who is giving a reluctant country a much needed history lesson.

You can also give money to Bernie here.