Orson Scott Card won’t get a cent from me

Like Angie, i am a big fan of the Orson Scott Card books (i actually liked the Alvin Maker series of magical antebellum historical rewrites even better than Enders Game). But i will join this boycott. You can get his books at the library, you can rip his movie from Pirate Bay and should encourage your Card fan friends to do the same. It pains me that a guy with so much imagination is so intolerant. And the irony of him requesting tolerance when he offers none is precious. 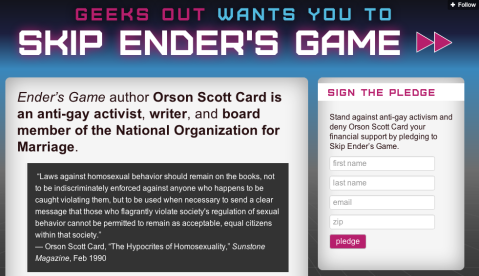 It is also worthy of note, that a similar fan boycott of Cards scheduled Superman comic (digital and paper) ended up killing the project when the artist bailed.  Boycotts work, get involved.

Or as ever clever Jaz suggests:

Another suggestion, for those of you who want to see the movie: pay for another movie – maybe one that you’ve already seen and liked, or that you want to do well – and then just head into the theater that’s playing Ender’s Game.