Dancing in the Ruins – My Friend Lucifer

For me one of the richest pleasures of anti-nuclear organizing is the characters who take on this work.  It takes a very peculiar kind of person to commit to fighting a reactor complex which has the support of the state, some of the countries most powerful corporations and giant banks, often campaigning for years concluding with a high chance of failure.

With Lucifer at Gorleben protest in Germany Circa 2008

Vladimir Slyviak is one of these unusual people.  He has been fighting reactors in Russia since before the wall came down.  In 1988, he and another activist corked a smoke stack and locked themselves to it over 100 feet off the ground, shutting down the plant for hours.

But you need to read that sentence again, because you were likely distracted by the action and perhaps missed the most important part, which is the date. In 1988 the KGB simply disappeared many people they found politically problematic.  To be a direct action activist in this era you needed to be unusually daring or crazy or both.  Vladimir might well be both.  Though his flavor of crazy, is like a fox.  I have been calling him Lucifer since 1991, he calls me goddess. 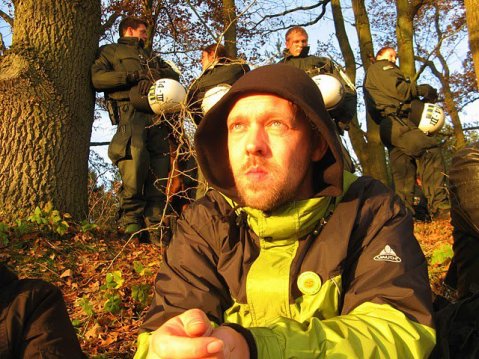 Waiting to be beaten up, by the police near by. Gorleben anti-nuclear transport protest circa 2008

Activists are opportunists.  We are out staffed, out spent and our opponents often have a legal monopoly on violence which they can use against us.  My favorite action of Lucifers was when a yellow cake shipment was being sent from St. Petersburg to the US via the cold water port of Kaliningrad. 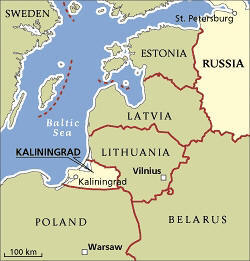 Kaliningrad is part of Russia without being connected to it.

The activists knew that they could not run Greenpeace like actions with tiny boats against these huge cargo ships with military escort, they would have been sunk and possibly killed.  So instead they hit them where it hurt.  They hit them in the bureaucracy.

Before the cargo ship could depart from “Russia” it needed to clear the port captains office in Kaliningrad.  The activists knew that the Kaliningrad police did not fancy their town becoming a nuclear way-station, so they blockaded the port captains office, making it impossible for the cargo ship to legally head to the US.  They blockaded the office for three days, the Kaliningrad police refused to remove them, the Navy escort had no jurisdiction on land.  Ultimately, the cargo ship went back to St. Petersburg with its yellow cake. 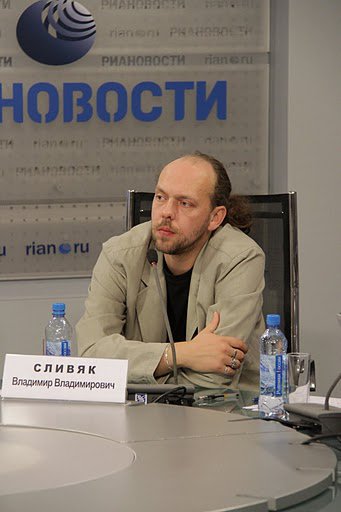 I officiated Vladimirs wedding to a French anti-nuclear activist in 1997.  Quite recently he wrote me about their success (against impossible odds) in stopping the new reactor complex in Kaliningrad.

In his dry Russia wit he writes:

you have to update your blog with important news:
we just halted construction of nuclear plant near Kaliningrad. i don’t know if it’s forever or for how long, but for now it is in coma. Rosatom already invested around $1bln, some nuke expert says. I truly love this way of spending money – they build some part of reactor, then we stop it and then we organize anti-nuclear festival and dance on ruins.

Dance in the ruins, my daring friend.  Dance.